The firearms and their accessories, the heavy ordnance, the style of armour, the bladed weapons, the pewter ware and especially the pottery put the wreck somewhere within the last two decades of the sixteenth century, certainly not later than the very first years of the seventeenth. Dendrochronological analyses of port cover 145, gave a felling date of not before AD 1575, but at least ten of the sapwood rings were missing thus raising the date to 1585. Time taken to season the timber must also be taken into account and finally, of course, there is the age of the ship. A properly maintained vessel of that time could have a working life of well over twenty years.

Lightest of the long guns, with a barrel length of 39-43 in., weighing 7-9lb & calibre of ~.58.
In 1485 Henry VII armed half his Yeoman of the Guard with harquebuses, but the weapon
did not spread much from there. When Henry VIII invaded France in 1544, only 7% of his
foot soldiers carried them. During Mary’s reign (1553-1558), the harquebus & the longbow
were made compulsory in nearly all counties; in theory, harquebusiers at this time
comprised 1/5 of the foot, in practice the figure seems to have been significantly lower.

Next in size/weight to the harquebus with greater bore, more robust stock, barrel length of
39-44in. (55in. overall length), weighing around 10-12lb with a calibre of ~ .76 to .80.
Calivers would fire further and had a greater impact. In 1596 they cost 12-30 shillings. The
absence of precisely defined technological distinctions between harquebus and caliver
blurs the period of introduction and transition, but certainly by the time of the wreck it had
completely replaced the harquebus as the main military firearm. In the county arsenals,
calivers continued in use along-side muskets well into the 17th century. They are the most
common type of firearm on the Alderney wreck.

Larger/weightier than the harquebus or caliver (supported by a forked rest when aiming)
with large recoil on discharge; barrel length of 45 -55in. (overall length of ~64-68in.),
weighing ~20lb with a calibre of between .80 to .92. Generally, a musket used 1.5 times
more powder than a caliver to propel a heavier bullet over a greater distance. It was
believed that the harquebus and caliver could be fired at twice the rate of a musket, but the
musket was a much more dangerous weapon. By the 1560s they were much utilized by the
Spanish; they were first used by an English company in the late 1580s. In 1588 the Norfolk
companies were ordered to arm 15% of their foot with muskets. By 1597 the government
wanted that increased to at least 50% - preferably 66%. The musket was a new weapon to
the English at the time, but was evidently being adopted rapidly. 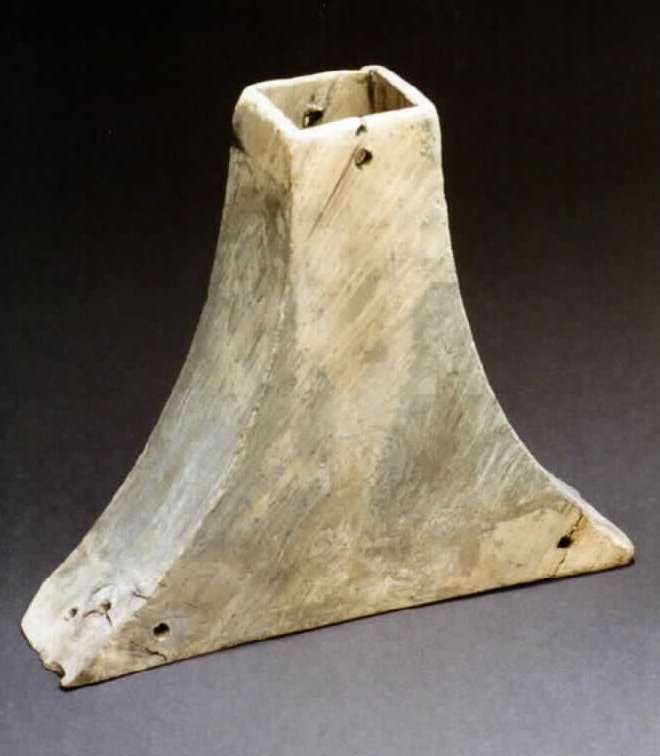 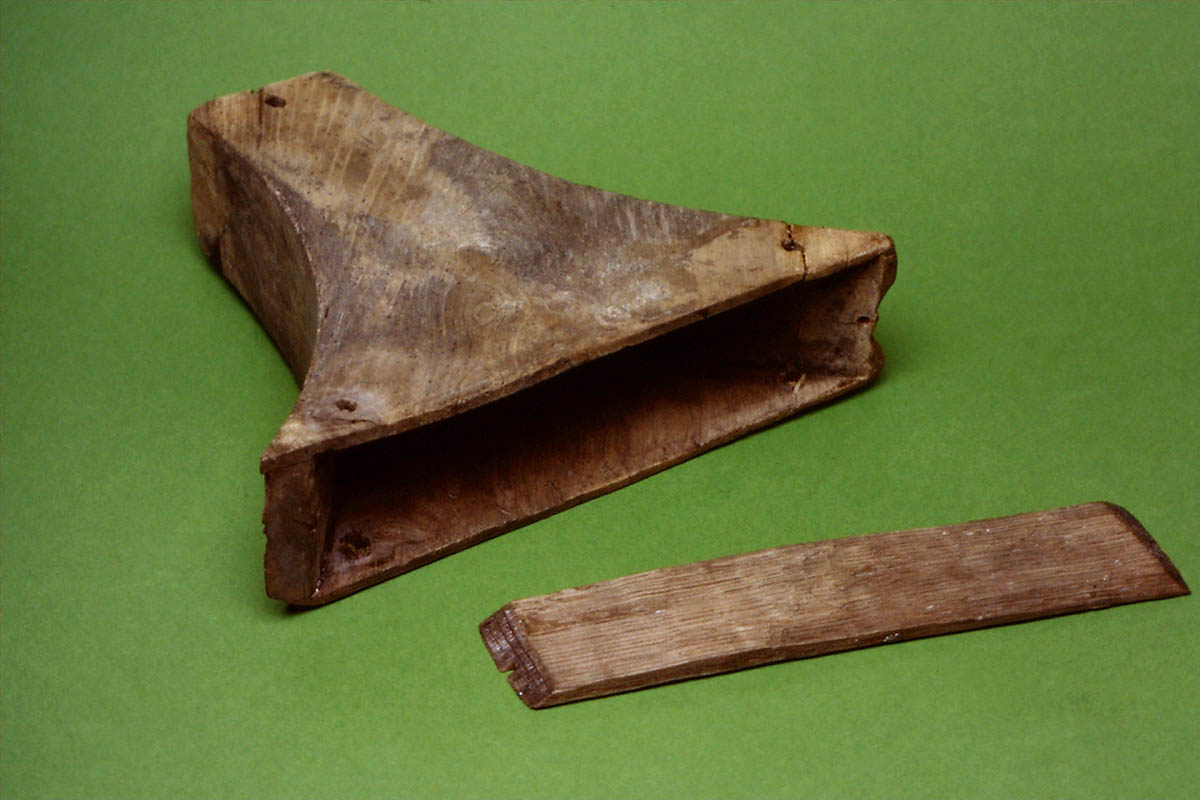 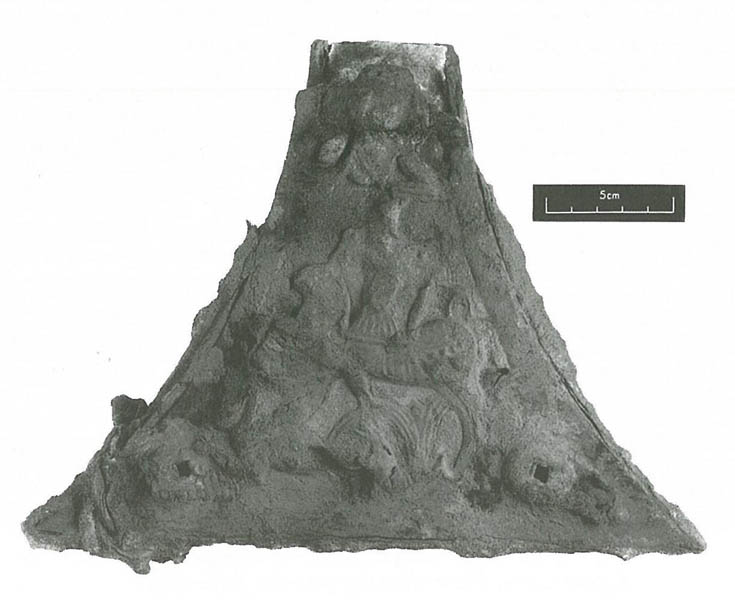 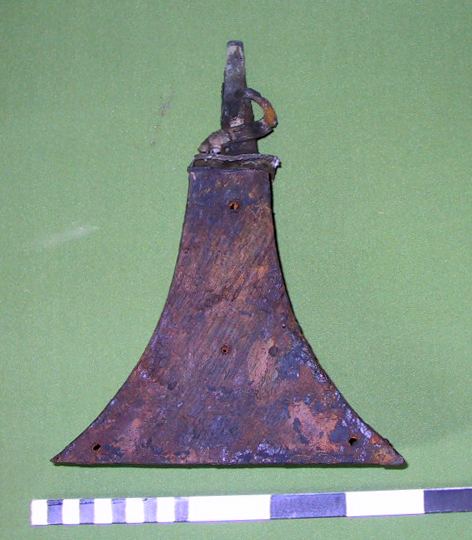 Three types of powder flask have been found on the wreck. The first are often known as apostles and
have been given their own section. The second (of which three examples have been found) was the
large, nozzled, concave-sided, flat-bottomed, wooden-bodied flask which, like the apostles, held
coarse-grain propellant for the barrel. The third (of which three examples have so far been found),
was a smaller version of the last, but was used to contain fine-grained priming powder for the flash-
pan. This was the powder which conveyed ignition, via the touch-hole, to the main charge within the
breech.

Due to their iron nozzles, fastenings and open-work decoration, all the wooden powder flasks
were found fully covered in corrosion products. An example conserved by York Archaeological
Trust, 529, was found to have maple wood sides and an oaken base (Quercus sp.). It had sheet-iron
edgings, possible iron decorative devices on the main field of the body, and there was evidence to
suggest that it had been covered in leather. Traces of hair, believed to be horse, were also found. The
flask was empty. The front of a second flask of similar size and shape, 1091, was covered with fine
iron plating that featured a mounted warrior in gilded relief. With both flasks, the tapering iron
nozzle and rectangular shoulder cap, did not survive. If they had, they would very likely have
featured spring-loaded, thumb-operated, cut-off devices at the base of their spouts to measure out
the precise amount of powder necessary for a successful discharge. The large, wooden flasks were
used for calivers (and one might safely assume harquebuses), while apostles were used to charge
muskets for which the right amount of powder was critical. 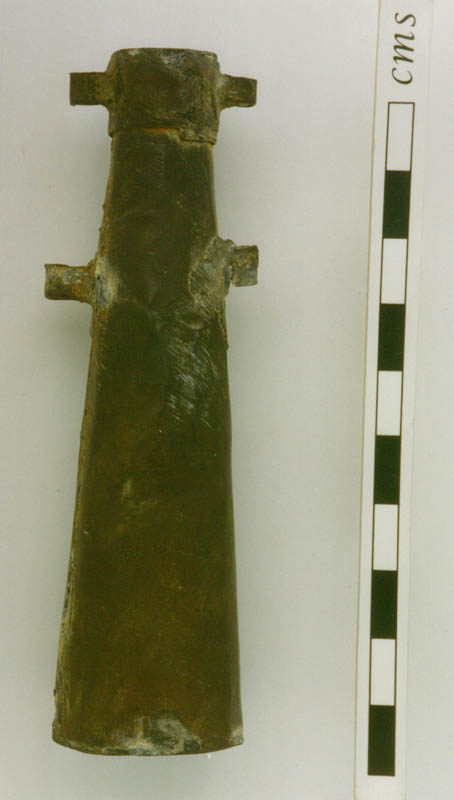 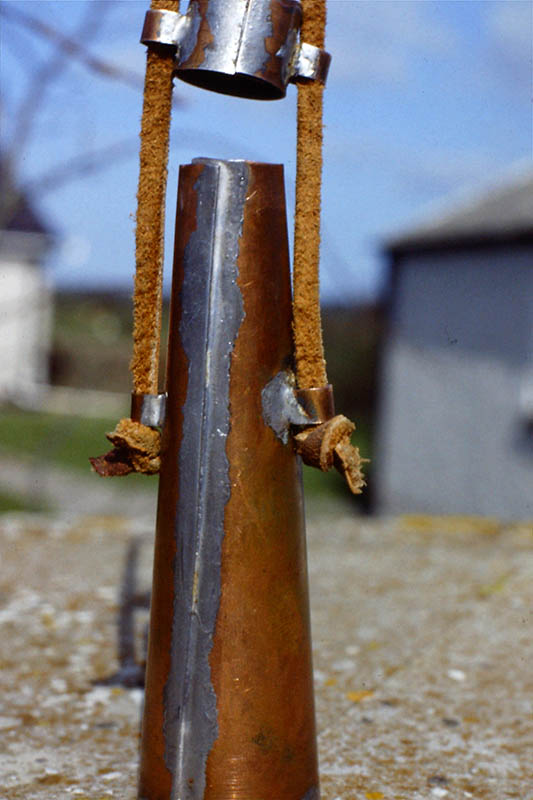 These were used to contain a single charge of powder for a musket. The amount of
powder in a charge was critical; too much and the weapon might be damaged, or
backfire into the eye of the shooter; too little and the shot would lose range and
accuracy. In a firefight there was not time to measure out the precise amount of
propellant, so musketeers usually prepared a number of charges in advance which
they hung in small flasks from a bandoleer across the chest. Often these numbered
twelve, hence they were dubbed ‘apostles’ much later in the 19th century. The
apostles from the wreck were all cut from copper alloy sheeting and joined along
their seams with lead/tin solder. Their bodies were of truncated form on base-discs
of 27-30mm diameter. Caps were pill-shaped with diameters of approximately 16mm.
Lugs were applied to the cap and body to take the cord from which they were hung.
Heights ranged from 86 to 106mm. [original shown alongside replica]

The military equipment on the Alderney ship included a number of
ceramic hand grenades, or ‘fire-pots’. Several were incomplete or semi-
complete state, but most were broken. No examples have yet been found
with their seals intact and fuses in place, although some had the remains
of pitch and a coarse fabric beneath the lip. Since no pellets were found
in association with the grenades it is assumed that they were not used as
fragmentation devices to produce casualties, but rather were incendiaries
that broke and spread fire, napalm-like, on contact. Grenades such as
these were also used as ‘Stink-Pots’ and also used to create confusion
immediately prior to boarding.

Helmets of older type that had been popular throughout the 16th century
and lasted even into the 17th. They were peaked at their fronts, rimmed
along the side and had a slight lobster tail at the back to protect the nape.
The skull part of the helmet appears to have been made in two halves
with a low, fore-and-aft comb covering the seam. On some the comb was
low, on others it was more high-reaching. Earlier burgonets often took a
face wrapper, but by the time of the wreck they were mostly open faced
and hinged to take cheekpieces that were tied with thongs under the chin.

They can be divided into two types; one, which rose to a pointed apex was
called a ‘Spanish’ morion after its country of origin; the other, which is
believed to have originated in Italy, was the ‘comb’ morion that had a fore-
and-aft rib over its top. Both types of morions had cheek pieces that were
tied together under the chin.

This breastplate bellied out in a low-slung style which reflected the favoured
form and line of men’s costumes during the last decades of the 16th century.
The main features of the peascod are the medial rib, or keel, a cupped
bottom and flanged rims over the thighs.

Gun 4 from the Alderney Elizabethan Wreck by bu_maritimearch on Sketchfab

The Alderney guns are representative of the 'new' trends in heavy ordnance
in contrast to those of the first half of the 16th century - they are iron muzzle-
loaders with trucked carriages, new breeching, use corned powder and iron
shot.

Three guns has been raised and conserved and are on display in the
Alderney Museum. All the shot so far recovered is of 78 – 80 mm (3 inches)
diameter indicating that all the guns on board were closely matched - 7ft
long, cast iron, smooth bore, muzzle loaders of 3½ inch bore and 14
hundredweight (1568 lbs). 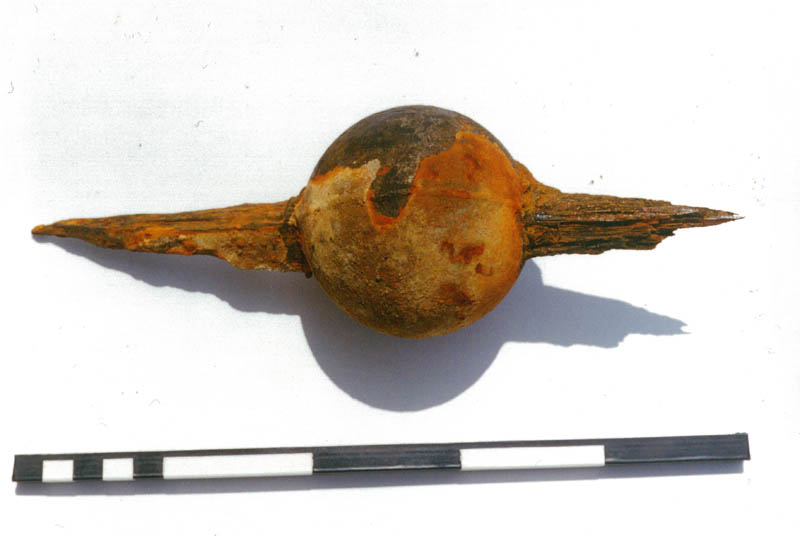 There are 42 recorded pieces of regular shot and there are likely to be more in the cannon that are
still on the sea-bed. On average, all have a diameter of 79-80mm. In addition to the round-shot,
eleven pieces of cross-bar (or ‘star’) shot were recovered (same average diameter as round shot)
as well as eight intact, or semi-intact, pieces of expanding shot). 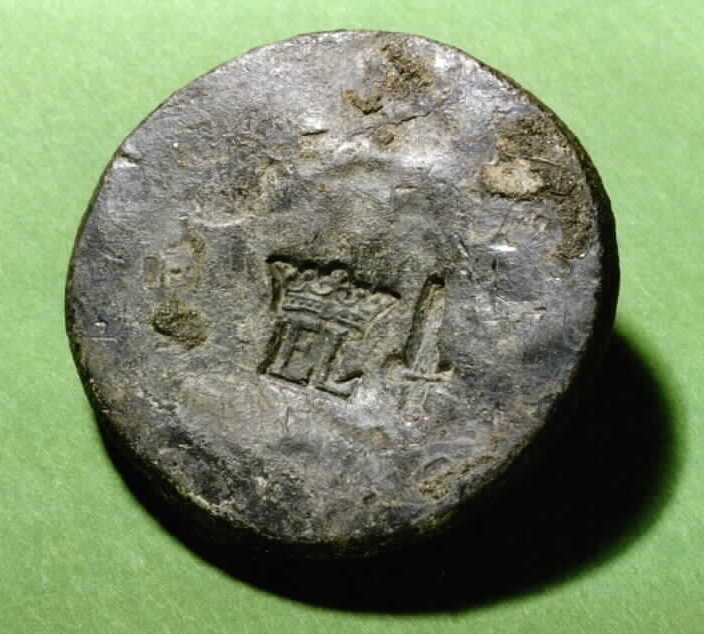 Two lead pan weights were found on the wreck, one of 1lb, the other of 2lbs. Both were
made by the Worshipful Company of Plumbers of London and feature a stamp of the
crowned monogram EL (for Elizabeth). The crown is of Edward I-type with alternating
fleurs-de-lys and pearls across the top, and a line of pearls along the head-band. To the
right of the monogram is the sword of the Archangel Michael (or St Paul according to
some), also known as the Guildhall Dagger, symbolizing the City of London. This cypher
was introduced by royal proclamation on 16 December 1587, but it was not fully enacted
until after the Armada year of 1588. The archaeological importance of the weights is that
they provide a secure terminus post quem for the wreck.

Learn the story of the initial discovery of the site, first excavation undertaken in the 1990s and all subsequent work up to the present day.

Find out more about the site of the wreck and the challenging physical conditions that affect investigations.

Peer reviewed journal articles, printed/online media pieces and other published material and research on the wreck, its contents and history.

Looking for more artefacts? Hit the button to start diggin’.